This healthy hoppin’ John recipe gets a meatless reboot. Start the new year off right with a healthified update to an old southern classic.

A soul food staple, Hoppin John is a black-eyed pea and rice dish made with smoked meat, onions, and peppers. Traditionally black-eyed peas are served on New Year’s Day with collard greens and cornbread. My grandma always had a pot going on New Year’s Eve for good luck in the new year. Most likely we would end up having fried fish and steamed potatoes if New Year fell on an off workday for her.

I didn’t grow up eating hoppin’ John. My grand’s black-eyed peas were sans rice. But learning different recipes throughout the years lead me across different versions of the New Years’ staple. My own culinary evolution led me to create a lightened up version of the dish.

Healthy hoppin’ John ingredients are black-eyed peas, rice, peppers, onions, and spices. In the traditional recipe, some sort of smoked meat was used to flavor the dish. So, in wanting to make this recipe healthier I opted to remove the meat but keep the smoked flavor. To achieve the smoked meat flavor I used ham bouillon. It adds the bacony taste that you would expect in this dish.

What to Eat With Hoppin’ John

To be honest, I never knew the significance people gave to foods other than black-eyed peas eaten on New Years’. For sure, I knew that peas symbolized good luck and prosperity in the new year. According to an article that I read the peas represent coins. It goes on further to explain that collard greens represent dollars, cornbread gold, and tomatoes good health! Check out my recipes for Golden Sweet Cornbread and Spicy Collard Greens with Bacon. 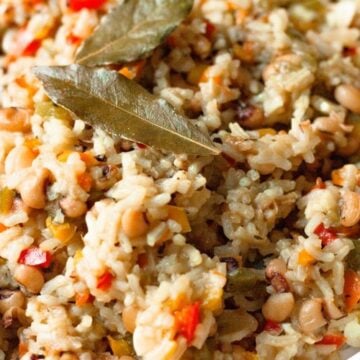